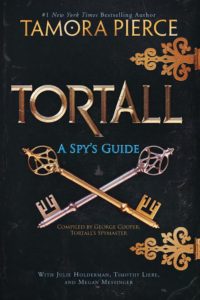 It’s the book The Whisper Man doesn’t want you reading! Tortall, A Spy’s Guide gives all you aspiring Sparrows (secret agents) and Hostlers (field agents) a look inside the Tortallan Royal Shadow Service, from the Secret Files of George, Baron Cooper.

Assembled by Tamora Pierce, with the assistance of Julie Holderman, Timothy Liebe, Megan Messenger, and Diverse Other Hands, the collection of Letters, Secret Diaries, and Confidential Guides reveals previously unknown (or unreferenced) aspects of the Tortall Universe, through the eyes of those trained to observe everything – and spy on it.

Available October 2017, this book is available for pre-order effective immediately. Be sure to reserve your copy today, before the record gets filleted by a nimble-fingered ex-King of Thieves, his Spymistress Daughter…. or “Father”….

Sadly, Tamora Pierce will be unable to attend Boskone 54.

Tammy apologizes to all her fans and friends who hoped to see her there.

from the article: “The Pixel Project’s Read For Pixels campaign was first launched in September 2014 in recognition of the longstanding power of books to shape cultural ideas and influence the direction of history…. To date, 60 award-winning bestselling authors from genres as diverse as Science Fiction, Fantasy, Crime, Thrillers, and Horror have participated in various Read For Pixels campaigns and initiatives, raising more than $33,500 for the cause to end Violence Against Women to date.”

The Pixel Project Selection 2016: 16 Authors Saying NO To Violence Against Women

Here is the original text of Tammy’s Margaret A. Edwards Award speech, as requested by some fans.

What a long, strange trip this has been—and yet I can’t complain. If you feel bitterly used and wish to exact vengeance at the end of my talk, I wish you luck, because it’s my father’s fault that I’m here, and he is swapping stories with the fellows in Valhalla. He was glad to hear that I fought my mother to watch the British TV series “Robin Hood” every weekday morning before I ran to school. You see, my father had three daughters, which means that I was the oldest son. I was never good at outdoor things, but when it came to books and television, my father shaped me. We shared the adventures of Thor Heyerdahl and Sir Edmund Hillary, Howard Pyle’s renditions (for boys) of the adventures of Robin Hood and of King Arthur, the historical novels of F. Van Wyck Mason and Kenneth Roberts, and the books of Edgar Rice Burroughs, Mark Twain, and Edgar Allen Poe. He approved heartily when I read the family Golden Library editions of The Iliad and The Odyssey. We watched “Davy Crockett” together, the World War II drama “Combat!”, and the original “Star Trek” series. My mother, who was a brilliant, troubled woman, oversaw my education in liberal politics and issues, and in religious and social history. She was the reason that my middle school principal introduced me to a visitor as “our little women’s libber.” It was the 1960s. Things were changing. I breathed in feminism long before my friends at school.

Not that I had many friends. Up until third grade things were all right. I lived in a small coal town where everyone dressed the same. Then we moved to the San Francisco Bay Area. I was obviously poor: one kid said I looked like a “refugee from a rag bag.” I used “big words.” I read too much. I knew no popular songs or dances or TV shows (we had no TV by then). I was beat up and bullied. A girl who had been my best friend the day before joined others at my bus stop to throw dirt clods at me.

END_OF_DOCUMENT_TOKEN_TO_BE_REPLACED

On NPR’s Weekend Edition series “Next Chapter”, Tammy does a brief talk about how she grew up in poverty, and went to college on scholarship to escape it.

She also mentions selling her first story during her junior year.

At Number 17, between Malala Yousafzai’s I Am Malala and Suzanne Collins’s The Hunger Games, is Tammy’s first Tortall novel. She’s delighted to be included on this list, and proud to be in such great company as Ms. Yousafzai, Maya Angelou, Alice Walker, Jane Austen and Khaled Hosseini.

BUZZFEED: 21 Books Every Woman Should Read in Her Lifetime

YA Author Molly Booth (Saving Hamlet), writing for The Mary Sue, is really looking forward to The Gift of Power (working title) – read why by clicking on this link!

Future clips from panels, and other recordings of Tammy’s appearances, will appear as either Tim cuts them into something manageable, or other people ask that they be added….

Tammy’s in great company at No. 2 (The Immortals and Circle of Magic Quartets) narrating as the Full Cast Audio Family performs the characters’ dialogue (including Bruce Coville as Niklaren Goldeye and Tammy’s husband Tim as Dedicate Crane, among other roles!), with Neil Gaiman (Ocean at the End of the Lane) at No. 1 – and Jenny Lawson (Furiously Happy), the late Christopher Hitchens (Hitch-22), and Seamus Heaney’s translation of the Old English classic Beowulf also on the list.

5 Great Audiobooks Read By the Authors

Both will be updated to reflect final signing times as soon as that information is available.

To answer a question that’s been going around, these will be Tammy’s only appearances in Australia this year. She would love to make it out to Melbourne, Brisbane, New Zealand, and all of the other suggested places that you guys have been begging for, but it’s just not possible with time and financial considerations. If you want to see her (at current or different locations), let Supanova’s staff know! Tammy loves Australia, and she’d love to come back.