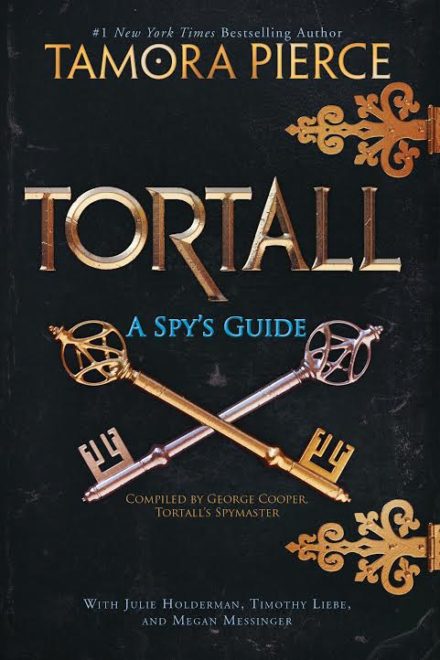 The secrets of Tortall are revealed. . . .

As Tortall’s spymaster, George Cooper has sensitive documents from all corners of the realm. When Alanna sends him a surprising letter, he cleans out his office and discovers letters from when King Jonathan and Queen Thayet first ascended the throne, notes on creating the Shadow Service of spies, threat-level profiles on favorite characters, Daine’s notes on immortals, as well as family papers, such as Aly’s first report as a young spy and Neal’s lessons with the Lioness. This rich guide also includes the first official timeline of Tortallan events from when it became a sovereign nation to the year Aly gives birth to triplets. Part history, part spy training manual, and entirely fascinating, this beautiful guide makes a perfect gift and is ideal for anyone who loves Alanna, King Jonathan, Queen Thayet, Kel, Neal, Aly, Thom, Daine, Numair, and the unforgettable world of Tortall!

These secret files of George Cooper, Baron of Pirate’s Swoop, are on sale now.

Tamora Pierce creates epic worlds populated by girls and women of bravery, heart, and strength. Her work inspired a generation of writers and continues to inspire us.

Few authors can slay so effectively with a single sentence—I mean fist-in-the-air, shouting-at-my-book slay—as Tamora Pierce. All these years later, I still draw strength from her words.