In the city of Chammur, on the eastern border of Sotat:

For centuries it had been called “fabled Chammur,” “Chammur of the Flaming Heights,” and “Mighty Chammur.” For twelve hundred years the city on what was now the easternmost border of Sotat had straddled the trade routes from Capchen to Yanjing. Chammur was guarded on the west by the Qarwan River. In the north and east were riddled mazes of the flame-colored stone that provided the oldest part of the city with sanctuary from bandits and warlords alike.

For Dedicate Rosethorn of Winding Circle temple in Emelan and her fourteen-year-old student Briar Moss, Chammur was a stop on a journey to distant Yanjing. Briar had only ever heard the name of the city and little more. Rosethorn, though, had been fascinated since she’d first read of it, and she was able to tell him something of its history on their way east. Her knowledge came from books: this trip with Briar was her first chance to actually see the place that she had studied for so many years.

The original town, Rosethorn said, had been built first on, then in, the spur of stone called Heartbeat Heights. Then it spread to the cliffs on either side. The sheperds, goatherds, and miners who originally settled the area had kept to the rocky mazes that stretched out for miles. It was easy to hide from any force that tried to prey on them in thousands of wind- and water-carved heights and canyons.

As trade prospered between east and west, the value of Chammur’s site and its nearness to the river drew merchants and farmers, who took advantage of the security of the stone apartments. As the city grew crowded, the wealthiest and most powerful moved their homes to the flat, open ground between the heights and the river, where they could surround themselves with elaborate houses and gardens. They also promoted themselves to the nobility: the cousins of present amir, or ruler, were among them. Although Chammur belonged to Sotat on any map, and its people bowed to the king in Hajra in the west, the truth was that the Chammur amirs were kings in everything but name, and had been so for centuries.

Rosethorn and Briar’s journey was a kind of working study program for Briar. No matter where they went, people could always find work for green mages, skilled with plants and medicines. Chammur was no different. Within days of their arrival, before they had completed their sightseeing, they had gotten so many requests for magical aid that Rosethorn knew they had to stay for awhile. She moved herself and Briar out of the Chammuri Earth temple’s guests quarters and into a house next door on the Street of Hares. Once settled, she began to work with Chammur’s farmers, Briar with the local Water temple and its stores of medicines and herbs.

Six weeks after their arrival, Briar at least had finished his work. The Water temple now had a store of powerful medicines and herbal ingredients that would hold them for a year, two if they were careful. After weeks of intense medical labor, Briar decided he owed himself a treat.

He approached the giant, enclosed arcades that held the souks, or markets, of Golden House and the Grand Bazaar with his hands in his pockets, whistling. He looked like many local males in his linen shirt, baggy trousers made from lightweight wool, and boots. His golden brown skin was vivid against the cream-colored linen. He wore no turban or hat as the Chammuri men and boys did, but left his black, coarse-cut hair uncovered. His thin-bladed nose might have come from any family native to the area. Even his gray-green eyes could have come of a match between a local and a passing merchant: races mingled here every bit as freely as they did in Briar’s former homes of Hajra and Summersea.

His destination was Golden House. He’d been in and out of the Grand Bazaar for weeks, buying oils, dried imported herbs, cloth for bags and jars, all for his work at the Water temple. Shopping there had given him the chance to look over the big and lesser specialty markets of the Bazaar. It wasn’t until he’d tried to arrange for a day and a booth from which to sell his miniature trees that he learned of Golden House. That was the place for him, the men who sold booth spaces had explained. In Golden House buyers found mages and magical supplies, precious metals, rare woods like ebony and sandalwood, jewelry, and precious and semiprecious stones. Briar’s miniature trees, which were not only works of art but were also shaped to draw particular magical influences to a home, belonged in Golden House.

By the time Briar had made arrangements for a stall there, he’d had to rush to be home for supper. Today he wanted a good look at Chammur’s wealthiest marketplace.

As he approached the two muscular guards at the door, he smiled impishly at them. They stirred, wary. He knew he looked like a student, perhaps, or even a merchant’s son, in clothes that were very well made by his friends in Summersea. He was even wearing boots. The guards had no real reason to bar him from entering, no matter how loudly their instincts might shout that he had the air of a thief.

“Hands,” one of them said when Briar would have strolled by.

He held them out, palm-down, and sighed. The guard who had spoken looked for jailhouse tattoos, and saw a riot of leafy vines that went from under Briar’s nails up to his wrists. The guard blinked, looked into Briar’s eyes, looked at his hands again, and nudged his partner. The other man looked at Briar’s hands, blinked, met the boy’s eyes, then stared at those vines again.

Briar was used to it. At one time he had indeed had prison tattoos, a black ink X etched into the web of skin between the thumb and forefinger of each hand. In most countries, they marked two arrests and convictions for theft. When Briar turned thirteen, he’d gotten tired of being turned away from places or followed in them. Without consulting Rosethorn, he’d brewed some vegetable dyes and borrowed his friend Sandry’s best needles. His plan had been to create a flowering vine tattoo to blot out the telltale Xs. He had not realized that vegetable dyes, exposed to his green magic, might not stay under his control. The final, colorful result blotted out the jailhouse tattoos as surely as if those crude black Xs had never existed. The new designs also made Briar’s hands into miniature, often-changing gardens that were far more conspicuous than his old tattoos.

“Hey, they moved — and they’re moving under the fingernails,” one guard exclaimed, pointing. He looked at Briar. “Don’t that hurt?”

“No,” Briar said patiently, used to the reaction and the comment. “But my arms do when I have to keep holding them out like this.”

Both guards scowled and waved him into the souk. Briar tucked his gaudy hands in his pockets and wandered into the main aisle. He avoided the stalls that peddled precious woods and gums. There was enough living power in those things still to hurt, especially when a touch would show him the original tree in all its splendor. He walked by the gold and copper aisles with only a glance. His friend Daja, a metal mage, would have plunged in here. One day he would explore and write her about it, but not today. 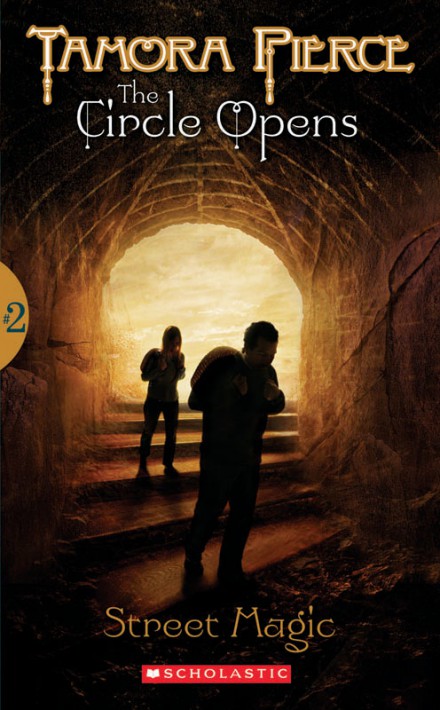