Fall that year was warm. Heat lay in a blanket over the basin of the River Olorun, where the capital of Tortall covered the banks. No breath of air stirred the pennants and flags on their poles. The river itself was a band of glass, without a breeze anywhere to ruffle its shining surface. Traffic in the city moved as if the air were thick honey No one with sense cared to rush.

Behind the royal palace, eleven-year-old Keladry of Mindelan stared at the rising ground that led from the training yards to the pages’ wing and decided that she had no sense. She felt as if she’d let people beat her with mallets all morning. Surely it was too hot for her to do as she normally did—run up that hill to reach her rooms and bathe. After all, she would be the only one to know if she walked today.

Who would think this cursed harness would make such a difference? she wondered, reaching under her canvas practice coat to finger broad leather straps. At some point during her first year as page, she had learned that second-, third-, and fourth-years wore weighted harnesses, and that more weights were added every four months, but she had never considered it in terms of herself. Now she wished that she had donned something of the kind in the empty summer months, when she made the daily trek to the palace to keep up her training. If she had, she wouldn’t ache so much now.

She wiped her sleeve over her forehead. It’s not even like you’re carrying a lot of weight, she scolded herself. Eight little disks—maybe two pounds in lead. You trained last year and all summer with lead-weighted weapons, just to build your strength. This can’t be that different!

But it was. Hand-to-hand combat, staff work, archery, and riding took extra effort with two pounds of lead hanging on her shoulders, chest, and back. I’ve got to run, she told herself wearily. If I don’t move soon, I’ll be late to wash and late to lunch, and Lord Wyldon will give me punishment work. So heat or no, I have to go up that hill. I may as well run it.

She waited a moment more, steeling herself. She hated this run. That slowly rising ground was torture on her legs even last spring, when she’d been running it off and on for more than half a year.

No stranger, looking at her, would have thought this disheveled girl was the sort to cause a storm of argument at court. She had a dreamer’s quiet hazel eyes, framed in long lashes, and plain brown hair that she wore cropped as short as a boy’s. Her nose was small and delicate, her skin tan and dusted with freckles. She was big for a girl of eleven, five feet three inches tall and solidly built. Only someone who looked closely at her calm face would detect a spark in her level gaze, and determination in her mouth and chin.

At last she groaned and began to trot up the hill. Her path took her behind the mews, the kennels, and the forges. Men and women in palace livery and servants’ garb waved as she ran past. A woman told some kennel workers, “Looka here— tol’ ya she’d be back!”

Kel smiled through pouring sweat. No one had thought that the old-fashioned training master would allow the first-known girl page in over a century to stay after her first year. When Lord Wyldon surprised the world and allowed Kel to stay, many had assumed Kel would “come to her senses” and drop out over the summer holiday.

You’d think by now they’d know I won’t quit, she thought as she toiled on up the hill.

She was lurching when she reached the kitchen gardens, her shortcut to the pages’ wing. There she had to catch her breath. An upended bucket did for a seat. She inhaled the scents of marjoram, sage, and thyme, massaging her calf muscles. For the hundredth time she wished she could use the palace baths as the boys did, instead of having to go all the way to her room to wash up.

“Hi! You!” cried a male voice from the direction of the kitchens. “Come back with those sausages!”

Kel got to her feet. A cook raced out of the kitchen, waving a meat cleaver. Empty beanpoles, stripped after the harvest, went flying as he crashed through them. Metal flashed as the cleaver chopped through the air. The man doubled back and ran on, plainly chasing something far smaller than he. Once he stumbled; once he dropped the cleaver. On he came, cursing.

The dog he pursued raced toward Kel. A string of fat sausages hung from his jaws. With a last burst of speed, the animal ducked behind Kel.

The cook charged them, cleaver raised. “I’ll kill you this time!” he screeched, face crimson with fury.

Kel put her hands on her hips. “Me or the dog?”

“Out of the way, page!” he snarled, circling to her left. “He’s stolen his last meal!”

As she turned to keep herself between the man and his prey, Kel glanced behind her. The dog huddled by her seat, gobbling his catch.

“Move, or I’ll report this to my lord Wyldon,” he snapped. “I’ll get that mongrel good and proper!”

Kel gathered dog and sausages up in her arms. “You’ll do no such thing,” she retorted. The dog, knowing what was important, continued to gorge.

“You’ll hand that animal over now, my lad, if you know what’s right,” the servant told her. “He’s naught but a thieving stray. He’s got to be stopped.”

“With a meat cleaver?” demanded Kel.

“Sausages is worth money! Who’s to pay for them? Not me!”

Kel reached instinctively for her belt and sighed, impatient with herself. She didn’t wear her purse with training clothes. “Go to Salma Aynnar, in charge of the pages’ wing,” she said loftily. “Tell her Keladry of Mindelan requests that she pay you the cost of these sausages from my pocket money. And you’d better not overcharge her,” she added.

“Kel … Oh, Mithros’s”— he looked at her and changed what he’d been about to say— “shield. You’re the girl. Being softhearted will do you no good, mistress,” he informed her. “Be sure I’ll get my money. And if I see that animal here again”— he pointed at Kel’s armful— “I’ll chop him up for cat-meat, see if I won’t!”

He thrust his cleaver into his belt and stomped back to the kitchens, muttering. Kel adjusted her hold on the dog and his prize and headed for the pages’ wing. “We aren’t allowed pets, you know,” she informed her passenger. “With my luck, all those sausages will make you sick, and I’ll have to clean it up.” She passed through an open door into the cool stone halls of the palace. As she trotted along, she examined her armful.

The dog’s left ear was only a tatter. He was gray-white for the most part; black splotches adorned the end of his nose, his only whole ear, and his rump. The rest of him was scars, healing scrapes, and staring ribs. His sausages eaten, he peered up into her face with two small, black, triangular eyes and licked her. His tail, broken in two places and healed crookedly, beat her arm.

“I am not your friend,” Kel said as she reached her door. 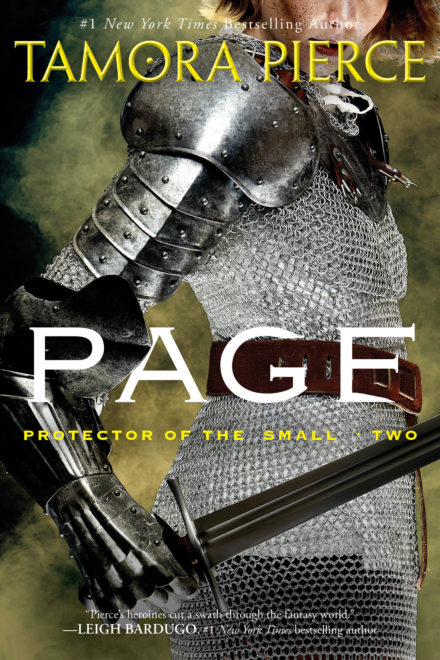