On a March afternoon a knight and a man-at-arms reached the gate of the Marenite city of Berat. The guards hid their smiles as they looked the noble over—in size the beardless youth could as well have been a squire, with only a shield to reveal his higher rank. They wondered aloud if the youngster could hold his lance, let alone unseat an opponent with it. Hearing them, the knight favored them with a broad grin. The guards, liking his reaction, fell silent. The man-at-arms gave a tug on their packhorse’s lead rein, and the small party moved through the gates into the city.

Most nobles dressed richly, but this knight wore well-traveled leather, covered with a white burnoose like those worn by the Bazhir of the Tortallan desert. With the burnoose’s hood pushed back, everyone could see that the knight’s hair was copper, cut so it brushed his shoulders. His eyes were an odd purple shade that drew stares; his face determined. Before him, in a cup fixed to his mare’s saddle, rode a black cat.

The man-at-arms was dressed like the knight. There were no grins for him—he was a burly, dark-haired commoner with no-nonsense eyes. It was he who asked directions to the inn called the Wandering Bard while the knight looked with interest at the streets around them. They set off in the direction of the inn, picking their way through the crowds with ease.

The cat swiveled his head, looking up at the knight. They think you’re a boy. To most, his utterances sounded like those of any cat; to the few he chose, he spoke as plainly as a human.

“Good,” the knight replied. “That’s less fuss over me.”

Is that why you left your shield covered?

“Be sensible, Faithful,” was the tart reply. “The shield’s covered because I don’t want it to get all over dust. It takes forever to clean it. This far south, who’d’ve heard of me?”

The man-at-arms, who’d drawn level with them, grinned. “Ye’d be surprised. News has a way of travelin’.”

The common room of the Wandering Bard was deserted except for the innkeeper, Windfeld, who was resting after the noon rush. He’d just begun his own meal when a stable boy charged in.

“What of that?” Windfeld replied. “We’ve had knights at the Bard afore.”

“Not a knight like this’un,” the boy announced. “This’un be a girl!”

“Don’t joke with me, lad,” Windfeld began. Then he remembered. “That’s right. Sir Myles wrote me of the lass he adopted a year past. Said she went as a lad for years, as page and squire, till she was knighted. That was when our stables almost burned, and I didn’t pay his letter the attention I ought. What’s her shield?”

“That’s her—Alanna of Trebond and Olau, Sir Myles’s heir.” Windfeld got up, removing his apron to throw it on the table. “And with the Shang Dragon here already! It’s bound to be a good week. The stable-yard, you said?”

Alanna of Trebond and Olau, sometimes called “the Lioness” for the cat on her shield, was surprised to be greeted by the innkeeper. The host of such a prosperous house did not meet his guests unless they were wealthy or famous. Since she had lived in Tortall’s Great Southern Desert for over a year, Alanna did not realize she had become famous.

Afoot, her cat cradled in her arms, she was short and stocky—sturdy rather than muscular. She did not look as if she could have disguised her sex for years to undergo a knight’s harsh training. And she certainly did not look as if she would excel at her training to the point where some—men who were qualified to judge such matters—would call her “the finest squire in Tortall.”

She also did not look like the adopted heir of one of her realm’s wealthiest noblemen. “I don’t know if Sir Myles told you,” Windfeld explained, “but I’m honored to serve his interests here in Berat. I bid you and your man welcome to the Wanderin’ Bard.” He nodded to the man-at-arms, who supervised the stabling of the horses. “Whatever you wish, just let my folk know. Would the two of you like a cool drink, to lay the dust?”

“I’ll see to the packs and the rooms,” the man told them. “I know,” he said quickly as his knight-mistress opened her mouth. “Ye’re wantin’ a bath; hot water, soap, and soon.” He grinned at Windfeld. “She’s that finicky, for a lass who’s livin’ on the road.”

Alanna shrugged. “What can I say? I like to be clean. Thanks, Coram.”

“He’s been with you long?” Windfeld asked, as he showed her into the common room, indicated a seat, and sat down facing her.

“Forever,” Alanna replied. “Coram changed my diapers, and he never lets me forget it. He helped raise my twin brother and me.” To a maid who’d come to ask what she’d like, Alanna said, “Fruit juice would be wonderful, if you have it.”

The innkeeper smiled as the servant girl left. “The Wanderin’ Bard has whatever may hit your fancy, Lady Alanna. How is your honored father, if you don’t mind my askin’?”

The maid returned with a pitcher and a tankard on a tray, presenting them to Alanna. Taking a swallow from her tankard, the knight sat back with a sigh. “He was fine when last I heard from him two months ago. Coram and I’ve been on the road for weeks. I’ve never been out of Tortall before, so we took our time. Maren doesn’t seem much different.”

Windfeld grinned. “Nor should it, Tortall and Tusaine and Maren bein’ cut from the same cloth. Things change, east of here.”

“Just the sickness that comes on a land now and then,” was the reply. “There’s a war in Sarain the last eighteen months or so. Only a Saren could tell you what started it, or what’ll finish it. But there,” Windfeld added, seeing a chambermaid at the door. “Your rooms be ready, along with your bath.”

The knight picked up her cat, who was playing with Windfeld’s apron. “Come on, Faithful,” she groaned, settling him over her shoulder. “Let’s get clean.”

A chill went through the innkeeper as he watched them go. Only now had he seen that the cat’s eyes were not a proper shade of amber, green, or gray; they were as purple as Alanna’s. Instinctively he made the Sign against Evil. 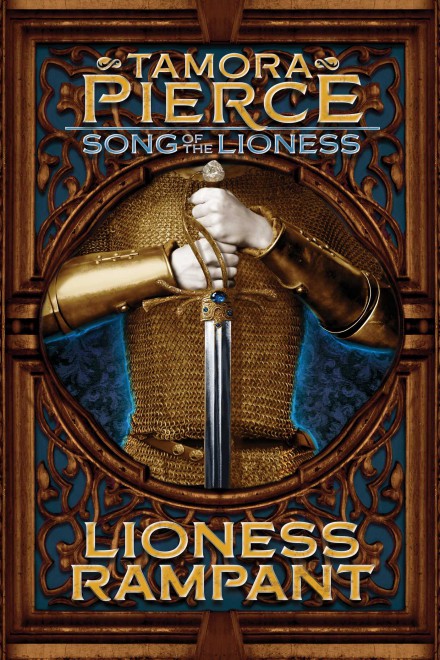