Sunset blazed above Gold Ridge Valley in north Emelan, throwing shadows over a company of mounted riders.  At the head of their train a bannerman carried the personal flag of Duke Vedris IV, ruler of Emelan. The duke himself rode behind the flag, surrounded and followed by his staff, guards, and friends. Smoke drifted through the air in veils, stinging everyone’s eyes. They had been riding through it for two days, watching it stretch over pastures and fields. Now at last, as the company entered the forests that filled the northern half of the valley, they began to rise above the thick air.

At the very rear of their column rode three girls and a boy, all mounted on sturdy ponies. When one of the adults, a woman in a dark green habit, stopped and dismounted from her horse, they also drew their ponies to a halt and watched her. She climbed out of the sunken road and walked several yards under the ancient trees. A big dog with curly white fur who trotted beside the four detached himself from their group and followed.

“Rosethorn?” asked Briar, the boy. “Is everything all right?”

“Just stay put,” ordered Rosethorn. She picked up a sturdy brnch and began to dig in the heavy litter of tree leaves and decaying wood underfoot. “I’ll be there in a moment.”

“That’s not what I asked,” Briar muttered to the girls out of the corner of his mouth. “I asked if everything was all right.”

Daja turned her mount. From this small rise she could look through a gap in the trees.

“Daja? Are you all right.” The voice belonged to the third girl in their party, Sandry. Everything about her, from her pony to her clothes, spoke of wealth that the other three young people did not have.When she turned her mount to see what had caught Daja’s eye, Briar and Tris did the same.

In the distance, where ridges of open pasture faded into the base of the southern and western mountains, long bands of sullen orange fire shone. Daja shook her head, making her eleven short braisds flap. “It’s like something from a nightmare,” she replied. “It looks like what the Traders call pijule fakol.”

Sandry shivered and drew the gods-circle on her chest for protection. She knew Trader beliefs. “The afterlife for those who don’t pay their debts,” she muttered.

Little Bear rose to his hind legs, planting his forepaws against Tris’s saddle. She leaned over to scratch his ears, her brass-rimmed spectacles glinting in the late afternoon sun. “That’s the nice thing about believing in the Living Circle,” she remarked. “No bad afterlifes. We just get reborn.”

Briar squinted, his gray-green eyes wary. “Those fires reach for miles. And there’s nothing to stop them from burning. This whole country’s dry as tinder.”

Rosethorn thrust a clump of tree-litter into a pocket, then returned to her mount. Once she was in the saddle, she beckoned to a local man who rode with the duke’s party. “How long has it been since you people last had a forest fire?”

The man chuckled. “Bless you, Dedicate Rosethorn, there’s not been what I’d call a real forest fire in this valley since—oh, since my dad was a pup. Our mage, him they call Firetamer, he tends to all our fires.”

“I was afraid you’d say that,” murmured Rosethorn, an earth dedicate of the Living Circle temples. “Come on, you four—we’re being left behind.”

Sandry urged her pony forward. Tris, Briar, and Little Bear fell in beside her.

Daja stayed where she was for a moment, her troubled dark eyes still on the blazes. How could anything as wonderful as fire look so menacing? she wondered. She worked with it every day; it was her friend. What if one day it turned against her as it had against Gold Ridge’s fields?

“Stay in pijule fakol, where you belong,” Daja Kisubo muttered to the distant flames. Clucking to her pony, she rode to catch up with her friends.

The next day Daja entered a small local smithy, loaded down with tools. She dropped everything beside the rough anvil, then realized that the staff she always carried had fallen to the ground as well. Swiftly she grabbed it from the pile, dusting its polished wood. She rested the staff against the wall near the hearth, stopping for a moment to run her fingers over its mirror-bright, unmarked brass cap. That bit of metalwork told those who knew how to read Trader staffs that she was trangshi, an outcast, with the worst luck in the world.

She turned her back on it and surveyed the cramped and dirty smithy. I wish I were home, she thought, eyeing the forge.

Home was the temple city of Winding Circle, where her master had a proper clean, well-lit forge. This dismal place was the twelfth smithy that she’d had to work in since the duke’s train began its journey. She was alone; the smith—who was also the village headman—was talking with the duke about what was needed to help this tiny valley survive the winter.

The smith’s absence, at least, was a good thing. Even his apprentice was gone, visiting a sick mother. She hated working in front of strangers. She was also tired of back country craftsmen who told her and her teacher Frostpine that they had things soft in Winding Circle. As if we did no real work of our own, she thought, inspecting the stone forge. Here was a pleasant surprise: the smith’s apprentice must have cleaned out the nest-shaped firepit and laid kindling for a new fire. He’d left her that much less work.

Looking at the kindling, she reached deep inside her to find her magic. Drawing out just a touch, she blew it into the firepit. Flames sprang up instantly.

Next she sent her power outside through the wall, to the other end of the tube through which the outdoor bellows pumped air under the fire inside. Since that summer, when Sandry had made the four friends’ magics into one, they had been able to talk in thought-form and to enter each other’s minds if they needed to. The ability was quite useful, particularly when one of them needed something from the others. Tri-is… Daja mind-called.

I know, I know. The magic under Trisana Chandler’s reply felt like cool winds and heavy mist. I had to pull the bellows out of the opening. You might want to stand away from the fire.

Not too much at first, Daja told her, then backed up. The burning heap of kindling fluttered, then blazed as air from the outside was thrust in under its flames. Daja heaped fresh charcoal around the sides of the kindling. Once it had caught, she added still more. Now give me some real air, she told her friend.

The answer came in the shape of a heavier stream of wind rushing through the opening under the forge. More charcoal caught. Daja stacked fuel until she had the right kind of fire to work her iron rods with.

Just keep it steady for now, she mind-called to her friend. I hope you brought something to read.

She felt Tris settle on a bench near the opening in the wall. Using one hand the other girl picked up a book. With the other she drew a skein of breeze from the sky into the bellows-hole.

It’s A History of Volcanoes, Hot Springs, and Mud Pots in the Mountains of Emelan. There’s a lot of information in it, Tris explained.

Sounds ravishing, Daja commented. Letting the magical conversation go, she grabbed a handful of long, thin iron rods, carried them over to the forge-fire, and put them in to heat.

She felt bad for Tris, stuck behind the forge. Her redheaded friend would have liked nothing better than to ride with the duke and their teachers, exploring the valley. Unfortunately, when Tris got cross, small winds turned to big ones. No one wanted her anywhere near the grassfires they had gone to inspect today.

Unlike Tris, Daja had no interest in grassfires and had said as much to her teacher Frostpine. She had wanted him to give her something new to work, like the ruddy copper that was mined in these parts. Instead he’d assigned her the most humdrum task an apprentice could get.

Nails, Daja thought tiredly. Barehanded, she drew a thin, cherry-red iron rod out of the fire. I dream of forging swords and crowns and armor, but what does he give me? Nails. She carried her rod over to the anvil and examined its gloryless surface. 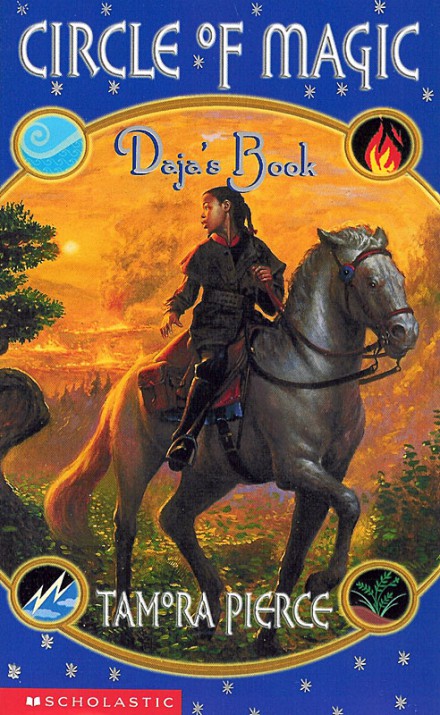