Briar Moss knew he was only dreaming, but he didn’t care. He sat in a giant oak tree, the heart of a great forest. A leather bag filled with emeralds was in his lap, and the oak whispered the secrets of trees into his ears. He was running the gems through his fingers, admiring their color and size, when they evaporated. The tree vanished. Now two large, unkind-looking men in black leather hustled him down a wet, dark corridor. They shoved him into an open cell, and slammed the thick door behind him. It boomed so loudly that it set up a train of echoes, each as loud as the first.

He opened his eyes. He was in the back of a wagon, tucked among an assortment of parcels and covered against the day’s cold drizzle by an oiled canvas sheet. Something boomed repeatedly in his ear, like the cell door in his dream.

He thrust up the canvas to glare at the rider who kicked the wagon with such determination. “Leave off, Sandry!” he growled. “I was having the best dream ever and you woke me!”

Lady Sandrilene fa Toren, a girl of Briar’s age, shrugged. The movement sent droplets rolling from her waterproof cloak and broad-brimmed hat. “Sorry.” There was no trace of sorrow in her bright blue eyes.

“What’s so important it couldn’t wait, then?” Briar demanded. There was no use scolding her. Hard words rolled off Sandry the way rain poured off her cloak.

“I’ve been thinking,” she said firmly. “Tris has a birthday—Daja has a birthday.” She had named the other girls who lived with her and Briar. “I have one. That leaves you.”

“You woke me to talk about birthdays?” he yelped.

“You said you don’t remember yours—”

“So pick one,” Sandry ordered him. “It’s not right, you having no birthday.”

“I don’t need one. What I need is sleep! Summer’s coming, and that means weeding. I got to rest whilst I can, and you ain’t helping.”

She sighed sharply. Her pony looked at Briar with reproach in his eye, as though it were Briar’s fault that Sandry bounced impatiently in the saddle. “Tell me you’ll think about it, or I’ll keep bothering you,” the girl insisted.

She would, too. Sandry’s determination awed Briar, though he would die rather than tell her that.

“Why? We’re almost to the Mire. I’ll see you at home tonight.” She clucked to her pony and trotted down the road.

Briar let the canvas drape fall and settled among the boxes and bundles. Birthdays! he thought. Only a girl-noble would think the day you came into the world was a thing to celebrate. His mother had certainly never mentioned it, that he could remember. Of course, he could just manage to remember her, a woman whose skin was as golden brown and hair as glossy black as his. She had smelled of cheap rose scent, and someone had knifed her one night as she came home from the inn where she worked. Briar thought he’d been about four then.

Memories like that were pointless. It was better to deal with his housemate: if Sandry wanted him to have a birthday, he’d better pick one and get it over with.

Briar yawned and shut his gray-green eyes. He wouldn’t choose a birthday in this month, that was certain. Even for Sap Moon, the weather was vile. Gusting winds tugged at Briar’s cover. Icy rain pelted the cloth. Everyone who had pinned their hopes on an early spring now drooped as they went about their days. His birthday ought to be in a green month. That way he could plead garden chores to cut short any sloppy, sentimental parties like the one they’d had for Tris soon after the turning of the year.

The wagon’s wheels lurched; its movement changed, making him slide across the many baskets and boxes that formed his seat. Briar went to the side of the wagon and peered out from under the drape. They had turned off Temple Road, the highway that ran between Summersea and the temple community of Winding Circle, where Briar, Sandry, and their housemates lived. Now the wagon clattered down Nosegay Strut, the main street of the slum called the Mire. Ahead Briar could see their destination, the large, forbidding, two-story building called Urda’s House, where the city’s poor came for the cheapest possible medical help. He wished that his teacher, the Earth Temple dedicate Rosethorn, didn’t come here, but she took her vows to serve the poor seriously. He’d only once suggested that they stop bringing the medicines they made to this place. After she’d finished her answer, he decided never to bring it up again.

And why is it, he thought irritably, that every time we come here it’s raining?

The wagon passed through the gate in the tall fence around Urda’s House and stopped. Briar stood and began to fold back the canvas drape. As he did, he looked out through the gate, across the street. That winter he’d made friends with a girl named Flick, a thief of the breed called “street rat.” Every market day that Briar came to Urda’s House with Rosethorn, Flick met him there. Together they would roam Summersea, getting into things and swapping tales of Flick’s days and Briar’s life when he’d been a street rat in distant Hajra. Today, though, he saw no Flick, only a trio of street rats he knew to be friends of hers.

He hoped she wasn’t in jail. He really liked Flick.

A woman in the dark green cloak and habit of one who had dedicated her life to the service of the earth-gods climbed down from the seat beside the driver of the cart. She thrust back the hood of her cloak to reveal a head of chestnut hair cropped mannishly short and parted on one side. Her face was lovely, with large, brown eyes, creamy skin, and a beautifully carved mouth. Briar had once thought she was her name, as pretty as a rose, as quick to bite as a thorn, before he’d scolded himself for romancing and shoved the notion out of his brain. Whatever else he thought, Rosethorn was a plant-mage, his teacher in the gardener’s and herbalist’s arts.

“Look alive, boy,” she advised him crisply, coming to stand next to the bed of the wagon. “Those medicines won’t do any good if they’re wet.”

“They ain’t wet,” he argued. “I wrapped ’em good.” He handed one covered bushel basket out to her and another to the wagon’s driver, who had come to help.

“Every time we bring you down here, all we’ve drummed into that thick skull on proper speech just gets buried in the mud,” Rosethorn commented, shaking her head. “Stay up there—we’ll do the carrying.” She followed the driver up the steps to the wide porch and into the hospital.

It took three trips for the two adults to carry everything inside. Once that was done, Rosethorn took a final basket from the cart and thanked the driver. Briar hopped out. With a nod to the dedicate, the driver climbed onto his seat and drove away. 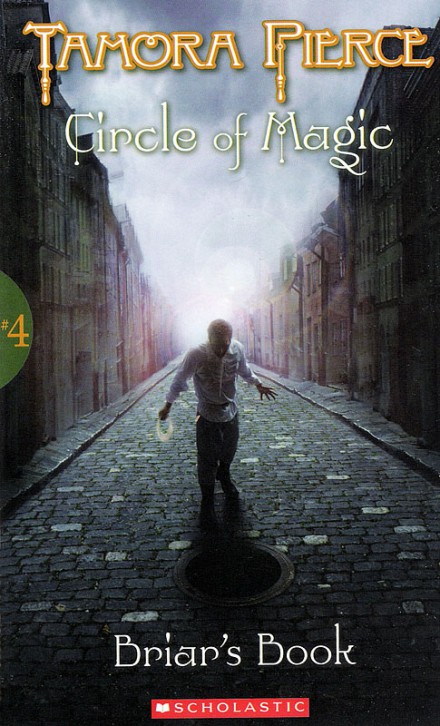