[Note: Originally posted on Tammy’s tumblr, a few years ago.]

You need a good thesaurus and a good dictionary.  You can’t always rely on your computer’s thesaurus and dictionary, any more than you can rely on its spell check function.  A computer thesaurus will cough up a hairball over an alternate for “peripheral,” and spell check won’t catch homonym errors.

DO NOT RELY ON WIKIPEDIA FOR RESEARCH.

Author biographies: Read as many as you can manage.  The only way to understand that everyone must work out how to write for themselves is to read how other writers did it, and try it out.  I particularly recommend biographies written for kids.  They concentrate more on how the person actually writes, and less on drama.

Advice to Writers: A Compendium of Quotes, Anecdotes, and Writerly Wisdom from a Dazzling Array of Literary Lights, compiled and edited by Jon Winokur

Author Talk, compiled and edited by Leonard S. Marcus
A kids’ book, it’s great for any writer. Marcus has the writers he interviews describe his/her work style, idea sources, work space, and how they came to what they do. He includes a manuscript page that each author has rewritten, so the reader sees the kind of work individual writers put into getting it right. It shows what I keep saying: There’s no right or wrong way to write, there’s only what works for you.

Bird by Bird by Anne Lamott
People I respect say this is the best book on the subject they have ever read.  I respect them, so I pass their advice on to you.

Danse Macabre by Stephen King
Written in the 1980s, this is a specialized book about horror: how it works, when it fails, who the good horror writers and filmmakers are, by the guy who is arguably the best.  It’s not up-to-date, but he has a good academic background in both horror and writing, and he’s happy to share.  It’s amazing how many tricks that work for horror also work elsewhere.

The Elements of Style by Strunk and White
More help with those nasty fiddly grammar bits.  A volume every writer should have.

How to Write Science Fiction & Fantasy by Orson Scott Card
He’s controversial for his views on things that aren’t part of his writing, but he has a clear understanding of what it takes to get a good story on paper, which is one reason why he is so popular with teenagers.  He is a great storyteller, which means he speaks intelligently and clearly about the key to writing for a wide audience.  Easy to find.

On Writing: A Memoir of the Craft by Stephen King
Oh, he’s nasty and he swears, does Steve, but he has a lot to say about how a person can make himself into a writer and just what it takes to stay a writer.  Part of this is autobiography, about his childhood and about his recovery from an auto accident that nearly killed him.  He’ll also tell you that his way to do it is the only way.  He’s wrong about that, but he still knows a great deal about writing, and he’s worth listening to.

The Portable Dorothy Parker, introduction by Brendan Gill
From Part Two: Later Stories, play reviews from Vanity Fair and The New Yorker, and book reviews.  Parker turns a critic’s relentless eye on what is overdone, what looks good and turns out badly, and what falls on its nose in writing, and she writes it all down with a razor dipped in ink.  You’ll laugh; you’ll cry; you’ll cringe.  Learn what not to do.

Telling Lies for Fun and Profit: A Manual for Fiction Writers by Lawrence Block
One of the best books about writing straightforward fiction, telling it right and telling it directly, without any weird chants or ceremonies.

The Tough Guide to Fantasyland: The Essential Guide to Fantasy Travel by Diana Wynne Jones
Though written as a travel guide, this is a very wicked, very POINTED guide to all the over-used and illogical tropes of high fantasy (and too many other kinds of fantasy as well).  Save yourself grief and rejections if you want to write fantasy, and find this book.

The Wand in the Word: Conversations with Writers of Fantasy, compiled and edited by Leonard S. Marcus
Interviews with writers like Lloyd Alexander, Susan Cooper, Brian Jacques, Garth Nix, Terry Pratchett, and other superstars of the kids’ fantasy universe, along with sample manuscript pages, suggestions for getting unstuck—this book is a treasure trove.

The Writer’s Quotation Book, edited by John Charlton
Sometimes the only thing that will convince you that you’re not the biggest screw-up in the history of creativity is to read the words of someone else who’s in the same mess. That’s what this book is for: to show you that Winston Churchill, Margaret Drabble, Somerset Maugham and Fran Lebowitz have all been there before you.

Zen in the Art of Writing by Ray Bradbury
A series of essays by a master of literary science fiction, his reflections on the genre, descriptions of his own process for generating ideas, and thoughts on the nature of writing and writers in general.

Little Details
You can ask other detail experts for help and help other writers with your own areas of expertise.

Society for Creative Anachronism
If you are into the medieval period or the Renaissance, these are the nutter butters for you.

When is–?
Holiday dates around the world.

Society of Children’s Book Writers and Illustrators
For picture books through teen, for writers just starting out to long-term pros, good for assisting first-time writers with connections with editors and agents and questions about the field.

Romance Writers of America
Don’t sneer, there’s a lot of crossover with sf/f/horror being written these days, and some of our brightest lights are writing it!

[T]here are certain ugly truths about the world that children and teens will grow into that books like The Hate U Give and the Protector of the Small series address – issues readers will eventually face in one form or another.

In a thoughtful and sobering article, Feliza Casano at Unbound Worlds shares her experiences with Tammy’s books, and the lessons she took from them. You can read it all here: How a Lady Knight Prepared Me for America in 2017

If you’re a fan of Tammy’s, you may be able to relate to this article in the LA Review of Books! In Growing Up Female, Josephine Wolff  delves into the “thread of pragmatic feminism” in Tamora Pierce’s books, beginning in the very first adventures of Alanna, and continuing in heroines like Daine and Kel.

It’s an intense and cult-ish thing to discover Pierce’s books as a young girl. Pierce is a fantasy writer beloved by many readers who do not consider themselves fantasy fans. This is because, for all their sorcerers and dragons, her books, at their core, are about young women growing up and figuring out who they are: how to be weird and stubborn and heroic and angry, how to deal with getting their periods, how to control their tempers, how to handle jealousy, how to decide whether to sleep with their best friends or their teachers, how to prevent pregnancy, how to navigate romantic relationships with men many years their seniors, how to challenge and defeat men many years their seniors, how to be women who don’t conform to the rigid expectations of their (entirely imaginary!) world and time.

Check it out here!

With the February 6th release of Tempests and Slaughter coming soon, 2018 is gearing up to be an exciting (and BUSY) year! The Tempests book tour will take Tammy to Colorado, Utah, Arizona, and both coasts– plus, she’ll be at conventions like Boskone, Conbust, BayCon, and the Teen Book Festival.

Check out the updated schedule to see where Tammy will be over the next few months. New events are added as they’re scheduled, so keep checking back!

Last month, Tammy spoke with Adventures in YA Publishing about Tortall: A Spy’s Guide, the writing and publishing processes, and her current projects. (She even teases at a scene in the upcoming Tempests and Slaughter.)

Check out the interview here: Tamora Pierce, author of Tortall: A Spy’s Guide, on making a difference!

Have you entered the official Tempests and Slaughter sweepstakes? It’s not too late!

Enter by December 19th for a chance to win a gorgeous gilded feather pin, seen below. (In the meantime, if you haven’t pre-ordered your copy of Tempests and Slaughter yet, you’ve still got time!) 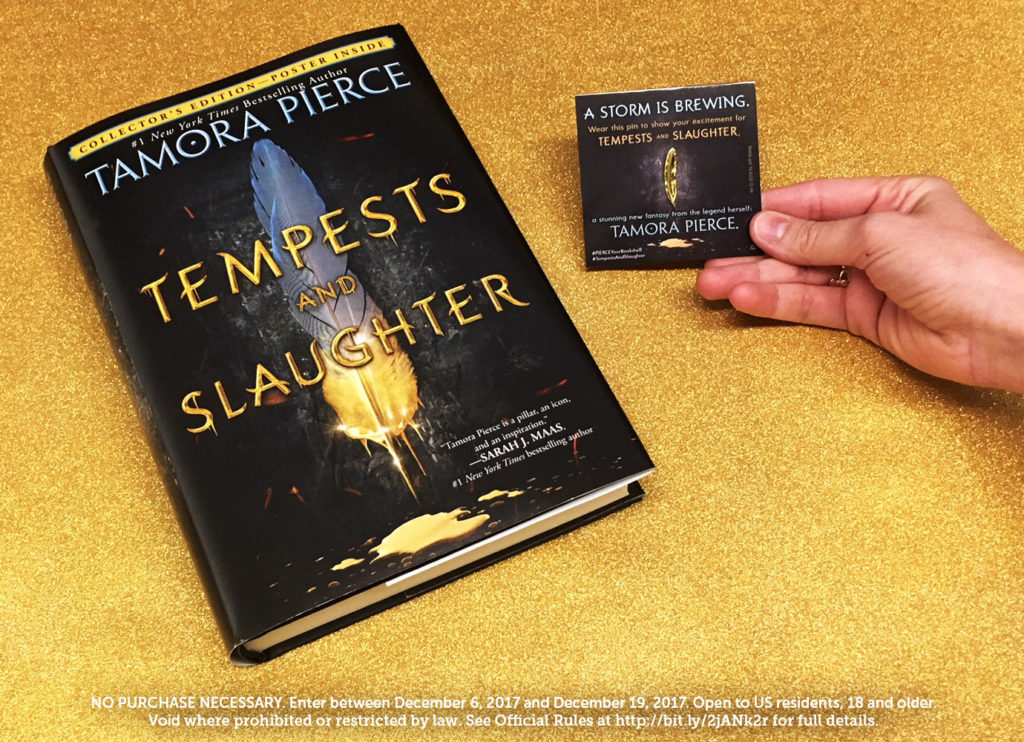 Both Tortall and the Circle Universe made The Mary Sue’s list of 8 Fantasy Series We Could Adapt Besides More Lord of the Rings! Check out the full list for more great fantasy series.

Check out Tammy’s recent interview with io9 about Tortall: A Spy’s Guide— what made the cut, and what didn’t— and the importance of diversity, representation, and realism in fantasy: Author Tamora Pierce on Straightforward, Inclusive Fantasy

io9: Let’s start with the new book, Tortall: A Spy’s Guide. Why do this kind of in-world expansion/set of information?

Tamora Pierce: People are always asking me—and if not me, friends of mine who know the universe well—details that don’t normally get included in the books, or details of story that haven’t come out yet. I was talking with my editor at Random House about just a basic dictionary or travel guide, or something of the sort that would have just bits and pieces that people would like that was pretty much insider information. I’d seen that there were several books of that kind that had come out at that point and I thought, “Yeah, we can do this.” That was my first mistake.

Earlier in October, Tammy spoke with Unbound Worlds at NYCC 2017. In addition to talking about the writing process, she speaks frankly about the feminist themes in her books:

Check out the full interview here: Tamora Pierce: ‘No is Not a Word You Should Tell Me’

Last week, bestselling author Leigh Bardugo interviewed Tammy for Parnassus Books’s AuthorsIRL blog. The two go into the world of Tortall, the writing process, and the future of Tammy’s books– and the YA genre as a whole:

As times have changed, I’ve tried to bring more variety in my characters to my books. It’s important that readers feel part of my universes—there’s too much exclusion and battering in this one.

(And, if you’re in the Nashville, TN, area, be sure to stop by Parnassus Books this evening to meet Tammy and her Spy’s Guide co-author, Julie Holderman!)