As you can imagine, the past few years have been eventful for Tammy and her helpers. Between writing new books, making appearances at schools and conventions across the country (and even overseas!), and a few special somethings on the horizon (you’ll have to wait for the announcements…), there’s always something going on.

This is thanks to Tammy’s fans— new and old. You keep Tortall and the Circle going! Because of you, more and more people are joining Alanna, and Kel, and Daja, and Briar, and Daine, and (soon) Numair on their journeys. This newfound popularity has been a wonderful surprise— and a major adjustment. In recent years, it’s been difficult to keep up with fanmail. To be honest, we’ve fallen woefully behind.

But now we’re undergoing a big project: we’re making a concerted effort to send a response to every single fan letter that’s been sent to Tamora since 2010. That’s right: all of them!

(Though regretfully, some letters may have been lost to spam filters, so if you still don’t have a response to your letter by the time this fan appreciation project is complete, that’s the most likely culprit.)

Be sure to check this space for updates. In the meantime, thanks, all of you, for your continued support of Tammy!

With the upcoming launch of the long-anticipated Tortall: A Spy’s Guide, Tammy and her co-authors will be making appearances at Books of Wonder (New York City), Politics and Prose (Washington, DC), and Parnassus Books (Nashville, TN). The coming months are shaping up to be very busy, so be sure to take a look at the Events page to see if Tammy’s coming to your area!

Please note that Tammy’s appearance at Buffalo Street Books (Ithaca, NY) has been moved to Saturday, December 2nd, from 2 – 4 pm.

END_OF_DOCUMENT_TOKEN_TO_BE_REPLACED

In “How ‘Harry Potter’ Saved Young Adult Fiction,” Tammy and other authors, publishers, and sellers of children’s books reflect on the Harry Potter series, from its rapid rise in popularity to its lasting impact twenty years later. Happy 20th Birthday to the Boy Who Lived!

(Also featured in the article is Peter Glassman, founder of Tammy’s favorite bookstore, Books of Wonder!)

Daja gets some recognition from Guardian readers as she makes the list of Ten Empowering Female Characters in Children’s Books! Regarding her impact, Hannah Catteral says:

She has a strong sense of justice and hard work, and is always a champion for her friends. She apprentices to an older blacksmith, Frostpine, who teaches her skilled and magical metalwork, and eventually becomes a master of her craft.

In later books, as she grows older, she also falls in love with a woman, and this is treated as perfectly normal. Having grown up with Daja, her friends and their adventures, this was absolutely wonderful and unprecedented for childrens’ series at the time. 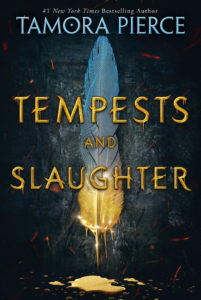 END_OF_DOCUMENT_TOKEN_TO_BE_REPLACED

Please Note: This is not a public appearance, and no public appearance in Boxborough is scheduled. This is a conference for Highly and Profoundly Gifted Children which Tamora Pierce attends when she’s able.

Are you a gifted child, or the parent or sibling of one or more gifted children? Do you want to spend time with other gifted children, or talk to other parents and siblings about your experiences with gifted children? Then Beyond IQ, a Conference Series For and About Highly and Profoundly Gifted Children, is worth attending for you and your HG/PG child/children.

From Friday, April 28 through Sunday, April 30, Beyond IQ will be held at the Boxboro Regency Hotel in Boxborough, MA. The conference features Friday Workshops for Professionals, Saturday and Sunday Conferences, and a Saturday Night Ice Cream Social. Attendees can either take advantage of special rates to stay at the hotel, or simply come during the conference itself if you live in the Greater Boston Area.

Registration is $70 a day ($65 Friday), or $130 for Saturday and Sunday, and you can register directly at the Beyond IQ Site.

On Monday, April 10, 2017 at 7:00 PM, Tammy will be sitting down with Eisner Award-winning graphic novelist Faith Erin Hicks (The Nameless City trilogy) for an evening’s conversation.  Join the two of them as they talk about a wide range of topics.

Admission is free, but seating is limited. Both authors’ books will be available for sale.

Also appearing, to speak or to lead workshops, will be literary agent Brent Taylor, author and illustrator Elizabeth Zunon. Those wishing critiques of their work, to register, or who have any other questions may visit SCWBI’s West/Central New York site.