The Stormwing sat on a low wooden perch like a king on his throne. All around him torches flickered; men spoke quietly as they prepared the evening meal. He was a creature of bad dreams, a giant bird with the head and chest of a man. As he moved, his steel feathers and claws clicked softly. For one of his kind, he was unusually clean. His reddish brown hair had once been dressed in thin braids, but many had unraveled. His face, with its firm mouth and large, amber eyes, had once been attractive, but hate deepened the lines at mouth and eyes. Dangling around his neck was a twisted, glassy lump of rock that shimmered in the torchlight.

Now he stared intently at a puddle of darkness on the ground before him. An image grew in the inky depths. In it, a tall, swarthy man turned the reins of his black-and-white spotted gelding over to a young hostler. Beside him, a girl—a young woman, really—lifted saddlebags from the back of a sturdy gray pony. When the hostler reached for her reins, the mare’s ears went flat; lips curled away from teeth.

“Cloud, leave be,” ordered the girl. She spoke Common, the main language of the Eastern and Southern lands, with only a faint accent, the last trace of her origins in the mountains of Galla. “It’s too late for you to be at your tricks.”

The mare sighed audibly, as if she agreed. The hostler took her reins carefully, and led mare and gelding away. Grinning, the girl slung the bags over her shoulder.

She is lovely, thought the Stormwing who had once been Emperor Ozorne of Carthak. The boys must swarm around her now, seeing the promise of that soft mouth, and ignoring the stubborn chin. Or at least, he amended his own thought, the ones with the courage to approach a girl so different from others. Boys who don’t mind that she converses with passing animals, not caring that only half the conversation can be heard by two-leggers. Such a brave boy—or man—would try to drown himself in those blue-gray eyes, with their extravagant eyelashes.

Ozorne the Stormwing smiled. It was a pity that, unlike most girls of sixteen, she would not make a charm this Midsummer’s Day to attract her true love. On the holiday, two days hence, she—and her lanky companion—would be dead. There would be no lovers, no future husband, for Veralidaine Sarrasri, just as there would be no more arcane discoveries for Numair Salmalín, Ozorne’s one-time friend.

“I want the box,” he said, never looking away from the dark pool.

Two new arrivals entered the image in the pool. One was an immortal, a basilisk. Over seven feet tall, thin and fragile-looking, he resembled a giant lizard who had decided to walk on his hind legs. His eyes were calm and gray, set in beaded skin the color of a thundercloud. In one paw he bore his long tail as a lady might carry the train to her gown.

The other newcomer rode in a pouch made of a fold of skin on the basilisk’s stomach. Alert, she surveyed everything around her, fascination in her large eyes with their slit pupils. A young dragon, she was small—only two feet long, with an extra twelve inches of tail—and bore little resemblance to the adults of her kind. They reached twenty feet in length by midadolescence, after their tenth century of life.

“Numair! Daine! Tkaa, and Kitten—welcome!” A tall, black-haired man with a close-cropped beard, wearing blue linen and white silk, approached the new arrivals, holding out a hand. The swarthy man gripped it in his own with a smile. As the young dragon chirped a greeting, the basilisk and the girl bowed. Jonathan of Conté, king of Tortall, put an arm around mage and girl and led them away, saying, “Can you help us with these wyverns?” Basilisk and dragon brought up the rear.

Something tapped the Stormwing’s side. A ball of shadow was there, invisible in the half-light except where it had wrapped smoky tendrils around a small iron box. The Stormwing brushed the latch with a steel claw; the top flipped back. Inside lay five small, lumpy, flesh-colored balls. They wriggled slightly as he watched.

“Patience,” he said. “It is nearly time. You must try to make your mistress proud.”

Mortals approached from the camp. They stopped on the far edge of the Stormwing’s dark pool; the image in it vanished. Two were Copper Islanders. They were dressed in the soft boots, flowing breeches, and long overtunics worn by their navy, the elder with a copper breastplate showing a jaguar leaping free of a wave, the younger with a plain breastplate. The third man, a Scanran shaman-mage, was as much their opposite as anyone could be. His shaggy blond mane and beard were a rough contrast to the greased, complex loops of the Islanders’ black hair. Hot though it was, he wore a bearskin cape over his stained tunic and leggings, but never sweated. Few people ever looked at his dress: All eyes were drawn to the large ruby set in the empty socket of one eye. The other eye glittered with cold amusement at his companions.

“Still watching Salmalín and the girl?” asked the senior Islander. “My king did not send us for your private revenge. We are here to loot. The central cities of Tortall are far richer prizes than this one.”

“You will have your richer prizes,” Ozorne said coldly, “ after Legann falls.”

“It will take all summer to break Legann,” argued the Islander. “I want to reunite my fleet and strike Port Caynn now! Unless your spies have lied —”

“My agents can no more lie than they can unmake themselves,” replied the Stormwing coldly.

“Then an attack from my fleet at full strength will take port and capital! I want to do it now, before help comes from the Yamani Islands!”

Ozorne’s amber eyes glittered coldly. “Your king told you to heed my instructions.”

“My king is not here. He cannot see that you forced us into a fruitless siege only to lure a common-born man and maid into a trap! I—”

The Stormwing reached out a wing to point at the angry Islander. The black pool on the ground hurled itself into the air. Settling over the man’s head and shoulders, it plugged his eyes, ears, nose, and mouth. He thrashed, ripping at the pool. It reshaped itself away from his clawing hands, flowing until it pinned his arms against his sides. The onlookers could hear his muffled screams.

When the man’s thrashing ended, Ozorne looked at the remaining Islander. “Have you questions for me?”

The younger man shook his head. Droplets of sweat flew from him.

“Consider yourself promoted. Bury that,” the Stormwing ordered, meaning the dead man. He looked at the Scanran shaman-mage. “What do you say, Inar Hadensra?”

The man grinned. Crimson sparks flashed in his ruby eye. “My masters sent me to see that Tortall is stretched thin,” he said in a cracked voice. “Where our forces go is no matter, so long as this bountiful realm is weak as a kitten in the spring.”

“Wise,” Ozorne remarked with a shrug of contempt.

Fire blazed out of the ruby, searing Ozorne’s eyes. He covered his face with his wings, sweat pouring from his living flesh, but the agony went on, and on. A harsh voice whispered, “Remember that you are no longer emperor of Carthak. Take care how you address me.” The pain twisted and went icy, chilling Ozorne from top to toe. Each place where his flesh mixed with steel burned white-hot with cold. “The power for which I plucked one eye out of my own head is enough to defeat the magic of a Stormwing, even one so tricky as you.”

When Ozorne’s vision cleared, he was alone with the dark pool on the ground, and the shadow next to him. “I’ll gut you for that, Inar,” he whispered, looking at the box. “But not before I settle my score with Veralidaine and the one-time Arram Draper.” Grabbing his iron box in one claw, he took off, flapping clumsily into the night sky.

Return to The Realms of the Gods 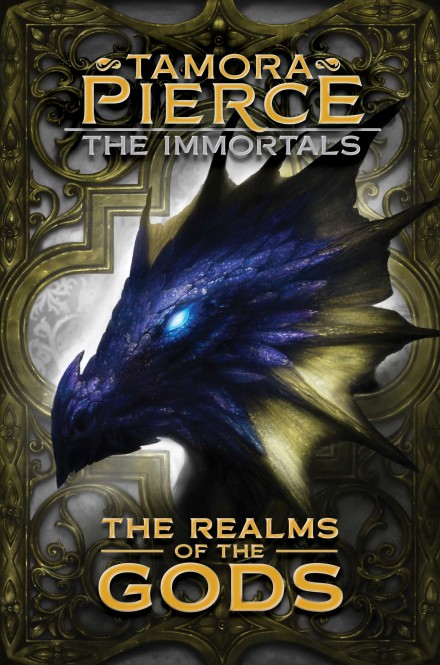