“That is my decision. We need not discuss it,” said the man at the desk. He was already looking at a book. His two children left the room, closing the door behind them.

“He doesn’t want us around,” the boy muttered. “He doesn’t care what we want.”

“We know that,” was the girl’s answer. “He doesn’t care about anything, except his books and scrolls.”

“D’you think I want to be a lady?” his sister asked. “‘Walk slowly, Alanna,’” she said primly. “‘Sit still, Alanna. Shoulders back, Alanna.’ As if that’s all I can do with myself!” She paced the floor. “There has to be another way.”

The boy watched the girl. Thom and Alanna of Trebond were twins, both with red hair and purple eyes. The only difference between them—as far as most people could tell—was the length of their hair. In face and body shape, dressed alike, they would have looked alike.

“Face it,” Thom told Alanna. “Tomorrow you leave for the convent, and I go to the palace. That’s it.”

“Why do you get all the fun?” she complained. “I’ll have to learn sewing and dancing. You’ll study tilting, fencing—”

“D’you think I like that stuff?” he yelled. “I hate falling down and whacking at things! You’re the one who likes it, not me!”

She grinned. “You should’ve been Alanna. They always teach the girls magic—” The thought hit her so suddenly that she gasped. “Thom. That’s it!”

From the look on her face, Thom knew his sister had just come up with yet another crazy idea. “What’s it?” he asked suspiciously.

Alanna looked around and checked the hall for servants. “Tomorrow he gives us the letters for the man who trains the pages and the people at the convent. You can imitate his writing, so you can do new letters, saying we’re twin boys. “You go to the convent. Say in the letter that you’re to be a sorcerer. The Daughters of the Goddess are the ones who train young boys in magic, remember? When you’re older, they’ll send you to the priests. And I’ll go to the palace and learn to be a knight!”

“That’s crazy,” Thom argued. “What about your hair? You can’t go swimming naked, either. And you’ll turn into a girl—you know, with a chest and everything.”

“I’ll cut my hair,” she replied. “And—well, I’ll handle the rest when it happens.”

“What about Coram and Maude? They’ll be traveling with us, and they can tell us apart. They know we aren’t twin boys.”

She chewed her thumb, thinking this over. “I’ll tell Coram we’ll work magic on him if he says anything,” she said at last. “He hates magic—that ought to be enough. And maybe we can talk to Maude.”

Thom considered it, looking at his hands. “You think we could?” he whispered.

Alanna looked at her twin’s hopeful face. Part of her wanted to stop this before it got out of hand, but not a very big part. “If you don’t lose your nerve,” she told her twin. And if I don’t lose mine, she thought.

“What about Father?” He was already looking into the distance, seeing the City of the Gods.

Alanna shook her head. “He’ll forget us, once we’re gone.” She eyed Thom. “D’you want to be a sorcerer bad enough?” she demanded. “It means years of studying and work for us both. Will you have the guts for it?”

Thom straightened his tunic. His eyes were cold. “Just show me the way!”

Maude, the village healer, listened to them and said nothing. When Alanna finished, the woman turned and stared out the door for long minutes. Finally she looked at the twins again.

They didn’t know it, but Maude was in difficulty. She had taught them all the magic she possessed. They were both capable of learning much more, but there were no other teachers at Trebond. Thom wanted everything he could get from his magic, but he disliked people. He listened to Maude only because he thought she had something left to teach him; he hated Coram—the other adult who looked after the twins—because Coram made him feel stupid. The only person in the world Thom loved, beside himself, was Alanna. Maude thought about Alanna and sighed. The girl was very different from her brother. Alanna was afraid of her magic. Thom had to be ordered to hunt, and Alanna had to be tricked and begged into trying spells.

The woman had been looking forward to the day when someone else would have to handle these two. Now it seemed the gods were going to test her through them one last time.

She shook her head. “I cannot make such a decision without help. I must try and See, in the fire.”

Maude wiped sweat from her face. She was afraid. “Never mind what I can do and what I cannot do,” she snapped. “Alanna, bring wood. Thom, vervain.”

They rushed to do as she said, Alanna returning first to add wood to the fire already burning on the hearth. Thom soon followed, carrying leaves from the magic plant vervain.

Maude knelt before the hearth and motioned for the twins to sit on either side of her. She felt sweat running down her back. People who tried to use magic the gods had not given them often died in ugly ways. Maude gave a silent prayer to the Great Mother Goddess, promising good behavior for the rest of her days if only the Goddess would keep her in one piece through this.

She tossed the leaves onto the fire, her lips moving silently with the sacred words. Power from her and from the twins slowly filled the fire. The flames turned green from Maude’s sorcery and purple for the twins’. The woman drew a deep breath and grabbed the twins’ left hands, thrusting them into the fire. Power shot up their arms. Thom yelped and wriggled with the pain of the magic now filling him up. Alanna bit her lower lip till it bled, fighting the pain her own way. Maude’s eyes were wide and blank as she kept their intertwined hands in the flames.

Ignoring all the laws of magic Alanna had been taught, the picture grew and spread. It was a city made all of black, shiny stone. Alanna leaned forward, squinting to see it better. She had never seen anything like this city. The sun beat down on gleaming walls and towers. Alanna was afraid—more afraid than she had ever been. . . .

Maude let go of the twins. The picture vanished. Alanna was cold now, and very confused. What had that city been? Where was it?

Thom examined his hand. There were no burn marks, or even scars. There was nothing to show that Maude had kept their hands in the flames for long minutes.

Maude rocked back on her heels. She looked old and tired. “I have seen many things I do not understand,” she whispered finally. “Many things—”

“Did you see the city?” Alanna wanted to know.

Maude looked at her sharply. “I saw no city.”

Thom leaned forward. “You saw something?” His voice was eager. “But Maude cast the spell—”

“No!” Alanna snapped. “I didn’t see anything! Anything!”

Thom decided to wait and ask her later, when she didn’t look so scared. He turned to Maude. “Well?” he demanded.

The healing woman sighed. “Very well. Tomorrow Thom and I go to the City of the Gods.”

Return to Alanna: The First Adventure 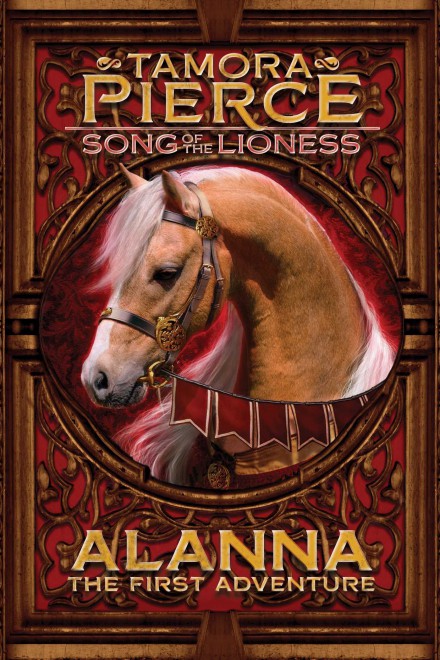